Wikipedia has an article about
EURISKO 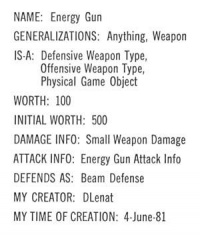 To test the system, he coded the rules and concepts of the role-playing game Traveller TCS into EURISKO. Lenat would leave EURISKO running each night, and check it in the morning. He would occasionally remove errors or unpromising heuristics from the system, or enter additional ones. Some discovered heuristics resembled viruses; one inserted its name as the creator of other useful heuristics, which would cause it to be used more often. EURISKO simulated many games with itself during this process. When Lenat took it to the competition, it was much more powerful than any other player, and won the competition. The next year, the organizers changed the rules one week before the competition. EURISKO was able to use its discovered heuristics to create a new fleet which once again won the competition. After this, the organizers told Lenat that if he entered again, they would cancel the competition, and he agreed not to.